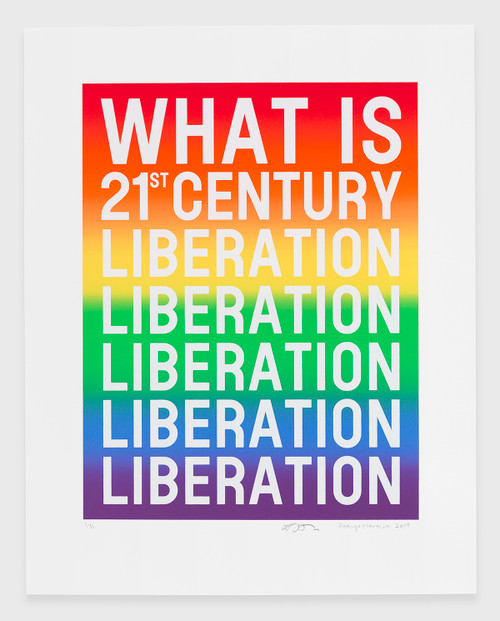 *Price does not include tax or shipping. If purchased in New York State, 8.875% tax will be added to the purchase total ($326.63). If sold out-of-state, Visual AIDS will contact the buyer to arrange a preferred shipping method.

This machine pulled, hand inked and blended print was printed at the Powerhouse Printshop by Luther Davis, Leslie Diuguid and Dennis Hrehowsik. The printing process creates unique color variations in each print.

The image was originally created as the cover of Visual AIDS 2019 activist broadsheet of the same title, which featured an intergenerational group of artists and activists describing what 21st century liberation means to them, in the context of the 50th anniversary of the Stonewall uprising.

An archival copy of the original broadsheet is included with each edition.

Avram Finkelstein is an artist, activist and writer living in Brooklyn, and a founding member of the Silence=Death and Gran Fury collectives, and is featured in the artist oral history project at the Smithsonian’s Archives of American Art. His book, After Silence: A History of AIDS Through its Images, is available through University of California Press.  He has work in the permanent collections of MoMA, The Whitney, The Metropolitan Museum, The New Museum, The Smithsonian, The Brooklyn Museum, The Victoria and Albert Museum and The New York Public Library, and his solo work has shown at The Whitney Museum, The Cooper Hewitt Museum, Yale University Art Gallery, FLAG Art Foundation, The Museum of the City of New York, Kunsthalle Wien, The Harbor Gallery, Exit Art, Monya Rowe Gallery, and The Leslie Lohman Museum. His practice also includes an experiment in political art-making, the "Flash Collective," an exercise centered on the creation of a one day collective to produce a single art intervention in a public space that combines the skills used in collective decision-making with a surgical and fast-paced format intended to cut directly to the point of the work, its social content. Finkelstein has conducted dozens of Flash Collectives at Yale, New York University, Concordia University, The New York Public Library, The New School, Visual AIDS, GMHC, Broadway Cares, and The Hemispheric Institute of Performance and Politics, has spoken about them at The San Francisco Museum of Modern Art, Yale, The New School, SUNY and Visual AIDS, they have been covered by Slate and the Vice Creators Project., and are the subject of a documentary, After Silence, by Vincent Gagliostro. Finkelstein has been interviewed about art in the public sphere by international publications including The New York Times, Frieze, Artforum, Bomb, Interview and The Boston Globe, and for multiple film and oral history projects, including Let The Record Show, Silence Opens Doors and The ACT UP Oral History Project, and has been invited to speak about art, political activism, AIDS activism, LGBT politics, LGBT cultural production, the American Left, and art and intellectual property by Harvard, Yale, Columbia, NYU, Exit Art, Fordham, RISD, MassArt, The New School, Parsons, The School of Visual Arts, CUNY, UMASS and the Arts and Labor working group of Occupy Wall Street. He was one of the Opening Ceremonies speakers at the Life Ball in 2011, and has created public awareness campaigns for AmFAR, The AIDS Policy Project, The Campaign to End AIDS, ACT UP, POZ, United Against AIDS, and ACRIA.

Rodrigo Moreira holds a B.A. in Graphic Design and Communication Studies with complementary studies in Fine Arts. He has been interested in systems of communication and how images and text can evoke and subvert certain ideologies. One of his recent focus of attention has been to create images and projects that defy normative notions of gender and sexuality. His project 'No Strings Attached (N.S.A)' presents a series of written interviews with immigrants who use social media, and a reinvention of immigration official forms, revealing how social media platforms for online dating, immigration, and surveillance are interrelated. Rodrigo was a 2016-2017 fellow of the QUEER|ART's mentorship project, and his work has been featured in selected exhibitions, such as FOUND: Queer Archaeology; Queer Abstraction at the Leslie-Lohman Museum, New York.

Broadsheet: What Is 21st Century Liberation?

Broadsheet: What Is 21st Century Liberation?

Party Out of Bounds: Nightlife As Activism Since 1980